If Celtic fans are still unhappy about the way Moussa Dembélé acted to get his move away from Celtic Park to join Lyon, they’ll be glad to know his first game with his new team didn’t go all that well.

Starting for the Ligue 1 side, the young French striker didn’t manage to get on the scoresheet, unable to stop a 10-man Caen from getting a point.

Result aside, Dembélé’s individual performance really wasn’t up to par, as L’Equipe gave him a 4/10, with his bad first touch on a strong ball from Fékir leading to a Caen counter-attack, which ended with Ferland Mendy fouling Claudio Beauvue in the box for a penalty. 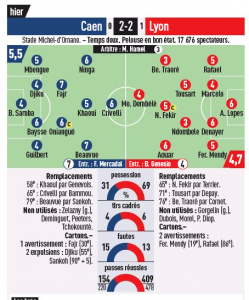 With an important game against Manchester City coming up in the Champions League, the former Celtic man will have wanted to impress enough to perhaps get a start against the Premier League champions, but that remains uncertain.

A lot will depend on how Bruno Génésio lines up his men.