Jadon Sancho was repeatedly linked with a move to Manchester United throughout the last summer window, but a deal couldn’t be concluded since the Red Devils failed to meet Borussia Dortmund’s demands.

As the number of reports kept on increasing, the hype around the possible deal kept growing. In the end, Manchester United fans had to settle for Facundo Pellistri and Amad Diallo. The former is currently on loan at Alavés, while Diallo has made a handful of first team appearances.

Sancho still continues to be named as a target for the Red Devils. Earlier reports from Germany indicated BVB remain hopeful Ole Gunnar Solskjaer’s side will return for the winger in the next market.

Dortmund CEO Hans-Joachim Watzke made it clear in February he will not ‘rule out anything’ when discussing the club’s potential outgoings.

Last week, SportBild suggested the Old Trafford club are in the picture for the England international.

DAZN and Spox interviewed Watzke and asked if him the probability of Erling Haaland and Sancho both playing for the Bundesliga side next season.

He said: “I’m not getting involved in probabilities, it’s no good. Jadon Sancho has been with us much longer than Erling Haaland. We’ll have to speak to Jadon too. If there is an exceptional offer, we will discuss it with the player and the agent, as always.

“Nonetheless, I am very sure that the transfer market will only run to a very limited extent this summer.

“Especially at the very big clubs, you can see what kind of wounds coronavirus has inflicted – and they are not small ones that heal within two weeks.” 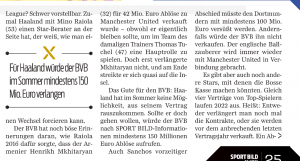 Watzke has made the conditions clear to allow Sancho to leave.

It’s now down to United and it remains to be seen whether or not they will continue to chase the player in the next market.