Over the past few weeks, reports coming out of Italy have named Liverpool as one of the clubs interested in Udinese star Rodrigo De Paul.

Leeds United wanted the midfielder last summer, but they couldn’t get the deal over the line.

Marcelo Bielsa’s side still retain an interest in the 27-year-old and Arsenal have joined them and other clubs in chasing him.

That’s according to journalist Pablo Planas, who mentions the Whites and the north London club as suitors for the Argentina international, in his column for Mundo Deportivo.

The former Valencia man finished the season with nine goals and 11 assists in 36 league matches for Udinese, and his performances have seen end up on the ‘list of many great clubs’.

Planas claims ‘everyone’s going crazy’ about the player, and his situation could be on the way to become an ‘auction’ this summer. That’s because Atlético Madrid, Napoli, Milan, Juventus, Leeds and Arsenal are ‘behind’ him. 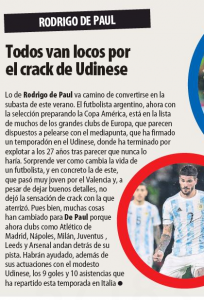 Leeds and Arsenal get a mention, but the journalist does not explain which of those sides will be able to secure the South American’s signature this summer.

De Paul is currently with the national team preparing for the Copa América, meaning he’s much likelier to complete a move to another club after the continental competition.