Two years after leaving Tottenham Hotspur for Atlético Madrid, Kieran Trippier is now linked with a move back to England, where Manchester United are credited with an interest in the right-back.

There have been repeated claims in the British press about the Red Devils wanting to bring the 30-year-old to Old Trafford, and some even went on to state the defender is looking for a house in Manchester.

Trippier remains a vital player for Diego Simeone and has publicly stated he’s happy with the La Liga winners.

Marca state the reality is that the England international’s environment, who are ‘filtering offers and interest’ from elsewhere, are ‘looking for a salary increase’. However, Los Rojibalncos are not willing to offer him an improved deal. 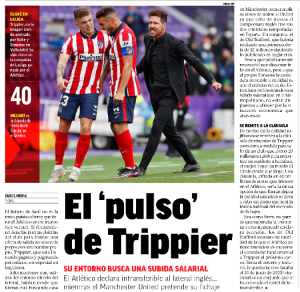 clause, and the newspaper state paying his full buyout clause is the ‘only option’ United or any other club can take the player away from Wanda Metropolitano.

Atlético have ‘no intention’ of lowering the price for the fullback. Given the stance maintained by Simeone’s side and also taking his age into account, Marca suggest it’s unlikely for United to pay €40m to sign Trippier in the summer.