In a strange turn of events, Chelsea are now ‘officially’ the favourites to sign Alisson, despite competition from Real Madrid.

We suggested that might have been the case when the Blues offered the Brazilian goalkeeper €500k/year more than the La Liga giants, but Il Tempo on Thursday now believe the AS Roma star wants the Premier League.

The reason behind this sudden change of heart mostly has to do with the wages on offer, according to the Italian newspaper, but the prospect of playing in a more ‘prestigious’ league also played its part.

Alisson would also prefer to move to London than stay in Rome, but before that happens, Chelsea will have to agree a fee with AS Roma, which won’t happen until after the Brazil international’s World Cup run comes to an end. 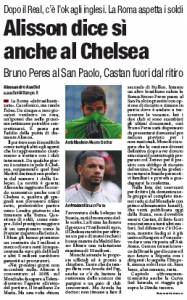 We covered his agent’s quotes on Wednesday, explaining his client was ‘100%’ focused on his country at this moment in time, meaning his future will have to wait.

Il Tempo also don’t buy the recent claims AS Roma want €100m for their star, but maintain the line that has been most common in the Italian media: around €75m.

Real Madrid, who were the first to really focus on Alisson, don’t believe he’s worth more than €50m, but the price hasn’t put off Chelsea.

Il Tempo claim the Blues are ready to offer the Serie A side around €73m, bonuses included.

Over in Rome, the Brazilian isn’t considered ‘unsellable’ anymore, and Monchi is simply waiting for the offers to land on his desk, fully prepared to close a deal if their valuation is met.