Monday’s edition of Het Nieuwsblad had a little snippet covering Leicester City interest in taking Youri Tielemans from AS Monaco, at least for the rest of the season.

The Belgian newspaper credited that information to the Daily Mail, and didn’t add anything to make it worth covering.

Yet, when their article appeared online, another sentence had been added, and it’s quite a crucial one: ‘Tielemans cannot complain about (a lack of) interest. AC Milan, FC Barcelona and Manchester United have reported themselves.’

This update had obviously come since publication of the newspaper, and given the three clubs aren’t going to have contacted Het Nieuwsblad, it doesn’t take too much detective work to realise where that claim will have come from.

The Belgian claims would mean the clubs interested would have asked for information, which, as Belgium’s DH point out, is a long way from actually doing anything about it. 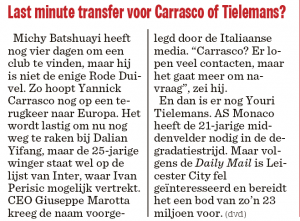 Manchester United and the others have all been linked at previous points and it seems very unlikely that all three, especially Barcelona given their recent recruitment, would actually have active interest for a January deal.

This looks an attempt to hype the player’s profile up after a difficult Monaco season.

Claims from France today say Jorge Mendes is trying to orchestrate a deal which would see Tielemans swap places with Adrien Silva at Leicester City.