Home Premier League Everton “You never know what he’ll come up with” – Sunderland rival on...
SHARE

Sunderland allowed Jordan Pickford to join Everton in 2017, after the Black Cats were relegated from the Premier League at the end of the 2016/17 season.

The 26-year-old came up through the ranks of Sunderland’s youth system before he was promoted to their first team in January 2016.

Maksymilian Stryjek was one of Pickford’s teammates during their time in Sunderland’s academy.

The 24-year-old ended his time with the League One side two years after the England international left them for the Toffees. He joined National League side Eastleigh in 2019 and a year later he signed for Scottish Premiership side Livingston.

Przegląd Sportowy have a detailed interview with Stryjek published in today’s edition of the Polish newspaper and the conversation starts with a question about the Everton player, asking if Pickford is the best English goalkeeper.

Responding to that, Stryjek said; “He’s good, but you never know what he’ll come up with. In my opinion, Nick Pope from Burnley is a little better.

“Jordan and I know each other from Sunderland and I used to wonder what would happen if I got the chance to play instead of him. Where would I be today? I feel like I’d be playing at a higher level.

“On the other hand, I can’t envy him [for] what he’s achieved. I was rooting for him and I 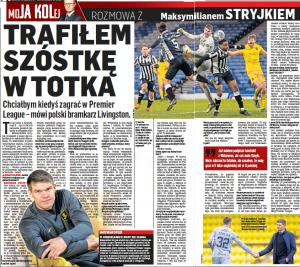 never had any negative feelings towards him. I was just hoping that I would start playing, but I wasn’t allowed to do that in Sunderland.”

Pickford has kept three clean sheets and conceded 22 goals in 17 matches for Everton this season.