Home Europe Wolves ‘are wrong’ – player’s situation ‘not normal’ and solution will be...
SHARE

There seems to be some annoyance in Spain over how Jesus Vallejo’s loan move at Wolves has gone.

Earlier today we covered a report from AS which stated Real Madrid have already contacted the Premier League club and want to cut the defender’s loan move short, so they can send him elsewhere in the January window.

There’s already offers in from other clubs, with Eintracht Frankfurt and Leganes said to be the clubs with the most serious interest.

On top of that article the Spanish newspaper also have an opinion piece from Tomas Roncero. He’s never shy of giving his view, and states both Wolves and Valladolid ‘are wrong’ given how little they’ve used Vallejo and Andriy Lunin.

Both are on loan from Real Madrid and big things were expected. 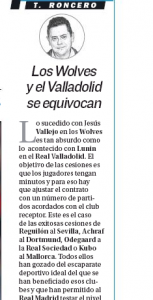 Vallejo’s situation is described as ‘absurd’, and it’s insisted Los Blancos have huge confidence that the player has a big future. That’s why his lack of opportunities is ‘not normal’ and why a quick exit is needed.

Wolves have given chances to Vallejo, even if they’ve been limited, and he’s shown little to suggest he should displace other options in Nuno Espirito Santo’s side.