Corriere del Mezzogiorno isn’t a newspaper we normally cover, but the Napoli publication’s Thursday edition has some transfer claims about their local club.

There’s some excitement in Naples that a deal could be agreed to take James Rodriguez from Real Madrid this summer, and there’s been a long chase to sign former Aston Villa player Jordan Veretout from Fiorentina.

Napoli will also see some exits, with Amadou Diawara said to be of interest to Wolves and Watford. The midfielder has been repeatedly linked with a move to the Premier League and it wouldn’t be a surprise if the 21 year old arrives in England this summer.

The situation is somewhat on hold, because an approach from Tottenham is being awaited. Mauricio Pochettino’s side have been interested previously, and there seems to be a hope that Spurs will come forward. 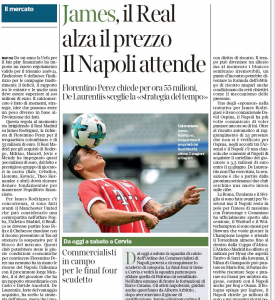 However, Diawara won’t wait around forever, and Wolves and Watford ‘have moved’ to make the signing.

If Tottenham don’t show up soon then there’s a chance he’ll take the other approaches seriously.