Home Europe Player not keen on joining Sheffield United, feels he could move to...
SHARE

After 12 years at Bayern Munich, Franck Ribéry will leave the Allianz Arena when his contract with them expires on June 30th.

The 36-year-old has still not confirmed his next destination and Kicker has a story about the winger in today’s edition of the German newspaper.

‘Premier League lures Ribery’ reads the headline, and within the story Sheffield United get a mention.

The Blades are one of the clubs promoted to the top flight club competition in England for the 2019/20 season and the report claims Chris Wilder’s side have become a candidate to sign the Frenchman in the summer transfer window.

Apart from the newly promoted Premier League side, Kicker states the former Marseille man has offers from Australia and Qatar. 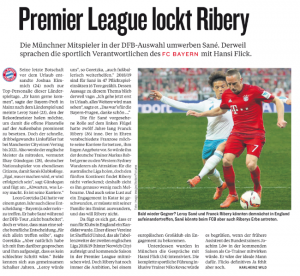 However, the player isn’t keen on joining Sheffield United or the clubs from the aforementioned countries because he still has the ambition to play for a major European club.

Depending on what type of contract he’s looking for, that could be a difficult aim.