Despite the player’s comments in May, Prince Oniangue staying at Angers is today presented as an option by L’Equipe.

The French newspaper have a big feature in their Tuesday edition on Ligue 1 transfers and Oniangue gets a mention when it comes to Angers.

Spending the second half of the season on loan at the French club from Wolves, it’s stated Oniangue is wanted longer term. Angers would like to keep the 29 year old Wolves owned player, but that can’t be secured they’ve got a back-up option ready.

That’s 32 year old Cheikh N’Doye of Birmingham City, who excelled for the French club before moving to the Championship in 2017.

N’Doye has a year left on his Birmingham City contract, whilst Oniangue has a two year deal remaining at Wolves. It’s possible Angers could work out the best potential value deal and go with that one. 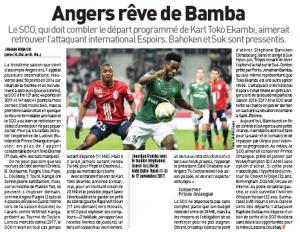 In May, Oniangue was quoted in France, when quizzed on a stay at his loan club, as saying: “We’ll see, but I do not think I’ll stay in Angers.”

If options are thin on the ground, there may not be a great deal of choice.