Wolverhampton Wanderers and Sporting have an agreement in principle for the transfer of João Palhinha, according to claims on Monday.

Portuguese newspaper Correio da Manhã writes today that an ‘eventual deal’ between the clubs could be done for around €15m.

Sporting are said to be working to push these figures up, but the current financial crisis would make it hard for the Lisbon side to achieve it. They also need to sell, as this is the only way they could make purchases in the upcoming transfer window.

Palhinha is currently having a two-year loan spell at Braga, where he’s become an important piece in their midfield in the past couple of seasons. 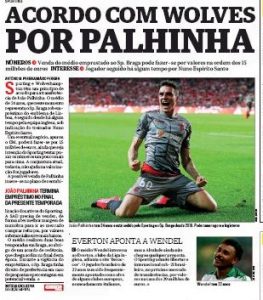 Correio da Manhã claims that Wolves have been following the 24-year-old for a while, as he’s been a special indication from manager Nuno Espírito Santo.

Palhinha was supposed to return to Sporting next summer, as he has a contract with the Lions running until 2022. He’s protected by a release clause of €60m.

‘Should be a bestseller’ – Shirt already picked out for Man City player, transfer talked up again

‘Everything is clear’ – Club have agreement in place with Birmingham...

‘Should be a bestseller’ – Shirt already picked out for Man...

Manager on his star being ‘wooed by Liverpool’ – Says transfer...