When signing Islam Slimani and Adrien Silva from Portugal, things didn’t work well for Leicester City, since both players had a hard time adapting to English football.

The Foxes still insisted on one more signing in the summer of 2018, buying Ricardo Pereira from Porto in a €22m deal. And that was a totally different experiment.

The right-back quickly earned a place in the team, and had been doing great until getting a severe knee injury this season. His form had been the reason he was linked to big clubs from the Premier League and abroad.

Pereira has spoken to Portuguese newspaper Record, and had a little to say about these transfer rumours.

“I’m fine at Leicester. I enjoy playing, the team plays very attractive football. It’s a growing club, with a very interesting mix of experience and youth. It is a very versatile squad,” Ricardo Pereira told Record.

“That said… I’m ambitious and I will always look for the best for my career. I want to be at the best clubs, play the best competitions. This season we are well positioned, in a place for the Champions League. Future? Why not take a step forward in my career?”

Asked if he’s reached his peak, the 26-year-old says it’s still to come.

“No, nothing like that. I still see a lot of mountains to climb, no doubt. I reached a very high level and felt, before the injury, at the top of my career. It was very well and things could have happened… But I still believe that the best is yet to come. I will continue to work every day to continue to grow. My future is going to be bright.” 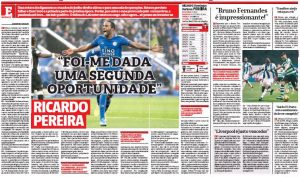 Ricardo Pereira has also been asked about his national teammate Bruno Fernandes, who joined Manchester United in January. The Leicester City player says he’s been impressed with how quickly the midfielder has adapted to the Premier League.

“Well. I was sure that Bruno would be very successful in the Premier League, but this way… I admit that I wasn’t. It’s impressive! We all know that Bruno Fernandes has an enormous quality, something he had already shown at Sporting and the national team. But it isn’t easy to get on the middle of a train, especially if that train is in a league like the Premier League and in a club like Manchester United.

“Normally, a player who arrives at the Premier League takes, on average, a season to adapt. Bruno Fernandes completed this whole process in just one week! And I’m not just talking about how he, individually, showed himself: for me, the difference is in the way the entire Man United team has improved with his arrival. He was the catalyst for this new Man United. I’m happy for him and I hope the good moment continues, except against Leicester [laughs]. It doesn’t have to be all games, does it?”

“We were just talking a few weeks ago. He texted me because of my injury and everything. We spoke again, in the meantime. During the quarantine he was cycling and I said that when he passes here in my area, to let me know that I am going after him. On one foot, but I will! [laughs]”

“I have no doubt that he will win the armband in a while. At Sporting he was already a captain and has a very strong personality, on and off the field. He already leads without being a captain. So, in a few years, Bruno Fernandes may even be a team captain.”