Home Europe Wolves player’s move to another club should be announced in coming days...
SHARE

Wolverhampton Wanderers’ Rúben Vinagre is currently on loan at Olympiacos and has made only four appearances for the Greek side this season.

Three days ago, A Bola reported the left-back will change clubs in the winter market, and it was also stated Olympiacos weren’t right to sign the Wolves man in the summer.

Friday’s edition of O Jogo explains SC Braga could be the 21-year-old’s next destination.

It’s claimed ‘at least one reinforcement’ is guaranteed for Braga in the upcoming window, and strengthening the left side of the pitch remains a priority.

Vinagre remains on top of the list as Braga manager Carlos Carvalhal publicly asked for his side to bring in new players in January.

Carvalhal prefers to use a 3-4-3 formation, and the signing of the new left wing-back should be ‘announced in the coming days’. 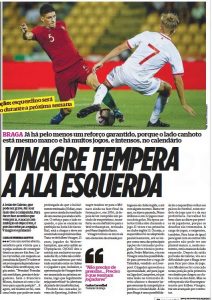 O Jogo state that even though Braga are not confirming it, they have found out ‘everything is settled between the two clubs and the player’ for Vinagre’s arrival.

This points towards a total agreement between Wolves and Braga, and also between Braga and the Wolves man.

The newspaper further adds the presentation of the Wolves defender should be announced next week, as soon as the transfer window opens.

Player ‘could leave’ Chelsea in shock move – Tuchel has ‘huge...