Having signed Joao Cancelo from Inter and Cristiano Ronaldo from Real Madrid, Juventus are dreaming big with their Jorge Mendes connection, and they want to make the most of it while they have access.

Describing the defender as the starter and the superstar as the main course, Corriere dello Sport believe the Serie A champions are perusing the dessert menu, which could include a Wolverhampton Wanderers player.

The two options are named Diogo Jota and Ruben Neves, and the Italian newspaper see the pair as having the ideal characteristics to fit right in in Turin, being young, talented and already internationally experienced.

Also connected to Mendes in a big way, Wolves will certainly have something to say in the matter when the time comes to let their exciting duo spread their wings and take off for bigger European clubs. 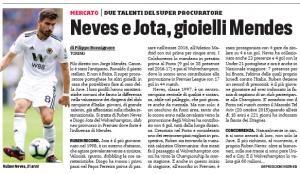 Of course, with such sales would come a huge financial package, and that’s why it’s in everyone’s best interests, including the super agent’s, to ensure the current season goes smoothly.

Wolves staying up in the Premier League would go a long way in achieving that, but Juventus are aware of the competition they would face, especially for the midfielder, with Manchester United and Manchester City allegedly circling.

We’d like to point out this doesn’t sound as anything concrete just yet, but it’s something to be aware of, especially if Mendes feels like he’s found a new nest for his stars and starlets going forward.

Marcel Brands ‘likes other profiles’ – Sounds like agent has offered...