Home Europe Wolves now said to be ahead of West Ham in race for...
SHARE

This morning, we covered a story from O Jogo which brought some big updates on Gedson Fernandes’ situation at Benfica.

It was said that even though the player was called up for tonight’s match, he was actually expected to go and negotiate his transfer to West Ham United at the weekend.

It turns out that Record also has an article about the midfielder today, but they actually put Wolverhampton Wanderers in the lead for him.

They say that despite the claims from the English press, West Ham ‘should not be his destination’, especially because Marouane Fellaini is a ‘strong’ candidate to sign for the club. 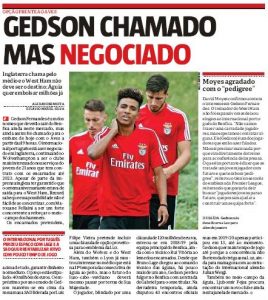 Record writes that Wolves ‘continue to be the most interested club’, although there are no big updates on how the negotiations with the Molineux side stand.

Even though there’s been a lot of talk about a loan spell of one and a half seasons, Record now claims that Benfica president Luís Felipe Vieira would rather sell the player now. The club would be looking for at least €40m.

It’s said that Lyon are also interested in the signing, but it’s more likely that Fernandes will end up moving to the Premier League.