Despite incessant claims that Wolverhampton Wanderers are interested in Lazio’s Wallace, there’s been no actual movement from the Premier League club’s part to actually sign the Brazilian.

What seems to be a Jorge Mendes led drive to find the centre-back a new club has yet to provide the desired reward, but that could change.

However, the latest claims suggest a move to Molineux might not be the only option in front of Wallace, as Gazzetta dello Sport explain that while 24-year-old is being ‘courted’ by Wolves, he’s also attracting interest from Besiktas.

The Turkish side are also reportedly after left-back Riza Durmisi, and their aim could be to try and sign both this transfer window. 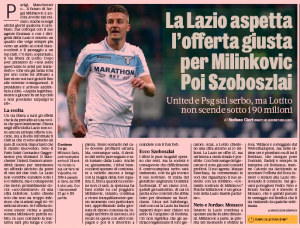 Could it be that Wolverhampton have been used to try and drum up interest in the centre-back all this time?

It certainly wouldn’t be the first time that’s happened with a Gestifute managed player over the past couple of years.