Home Premier League Chelsea ‘Will there be offers?” – Transfer worry, after player ‘step away’ from...
SHARE

Jules Kounde to Chelsea was one of the late dramas of the summer transfer window, with the Blues keen on the defender, but not keen enough to pay anything like what Sevilla wanted.

Personal terms weren’t an issue, as they rarely are for players moving to Stamford Bridge, and it felt like Kounde and his camp were simply waiting for Chelsea to arrive with a better offer and convince the La Liga club into a sale.

That didn’t happen, and Sevilla have repeatedly been vocal about their rejection of Chelsea’s attempt to sign the France international. After having a little strop as he realised his big move wouldn’t happen, Kounde has been pulled back into the fold at Sevilla, and is continuing to show good form.

AS explain this in their Monday edition, but also make clear there’s some worry that there could be attempts for Kounde in January.

He was a ‘step away’ from Chelsea in the last window, and given they didn’t sign someone else instead, it follows that they could return in the winter market. 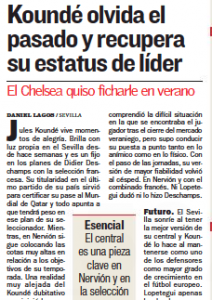 The Spanish newspaper ponder ‘will there be offers on the Sevilla table’ in January, and only time will tell if Chelsea, or anyone else for that matter, presents themselves to sign Kounde.