West Ham United have ‘showed interest’ in Ajax striker Lassina Traoré but would face competition from Wolverhampton Wanderers for his signature.

That’s according to De Telegraaf, who dismiss both side’s chances of getting the Burkina Faso star should they make a move.

Traoré has been a regular for Ajax since stepping up from the U21s in July 2019, having joined their youth set up from Rahimo FC in 2017.

He’s been a massive hit since making his debut in May 2019, with 12 goals and 12 assists in 29 first appearances so far adding to his impressive record with the U21s, where he scored 22 and assisted 11 in 33 games.

Those numbers have not gone unnoticed it seems, with De Telegraaf stating that West Ham and Wolves have ‘showed an interest’ in the forward.

The Hammers are known to be on the hunt for a new striker this month, with Sebastien Haller continuing to struggle and Michail Antonio having struggled with various injuries.

Indeed, they have been linked with several strikers around Europe and a return for Marko Arnautovic has also been mooted. 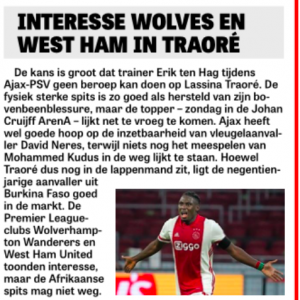 Wolves, meanwhile, need a replacement for Raul Jimenez after he suffered a fractured skull earlier in the season and left them with just Fabio Silva upfront.

Both they and West Ham will face frustration should they make a move though with De Telegraaf stating that while Traoré is ‘well-positioned’ on the market, the striker ‘cannot leave’.

That would suggest Ajax simply aren’t interested in negotiating a deal and the Premier League pair would be better served turning their attention elsewhere.