The right-back joined the Austrian side from Ajax in 2019 and has been a regular since the start of last season. He has impressed this campaign by managing nine goals and seven assists from 30 matches in all competitions.

This week’s edition of SportBild has a report focusing on the transfer business done by Red Bull Salzburg over the last decade and how they could continue to earn from the potential sales of some of their current players.

Kristensen is one of the candidates and regarding the fullback, the report explains the Hammers are among the clubs hovering to sign him, along with Hertha Berlin, Borussia Dortmund, AS Roma and VfL Wolfsburg.

“He is an absolute leader on the pitch. His emotions push the whole team. As a right-back, he has a very strong offensive drive, marches up and down the line and is also a goal threat,” Red Bull Salzburg manager Matthias Jaissle said about the Dane. 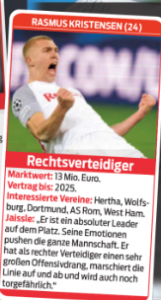 West Ham looked at Kristensen in January 2020, but were unable to take him away from the Austrian side.

Coufal, Ryan Fredericks and Ben Johnson are currently the three right-backs at West Ham, and the latter two have their contracts expiring in June.