Tottenham Hotspur are in the winter market looking for a new striker following an injury setback to Harry Kane.

Real Sociedad’s Willian José has been heavily linked with Spurs and Noticias de Gipuzkoa reported on Wednesday the La Liga side are convinced there will be ‘one last offensive’ from the north London club.

Thursday’s edition of Spanish newspaper AS explains negotiations with Tottenham have ‘cooled off’ and West Ham United have entered the scene.

It’s claimed the Hammers ‘intrude’ for the Brazilian and they are ‘interested’ to take him on loan with a purchase option.

The report adds anything can happen before the window closes as he was left out of Sociedad’s squad for their 3-1 Copa del Rey victory over Osasuna on Wednesday. 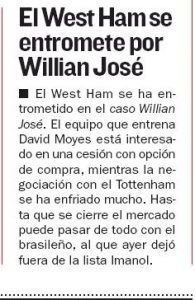 Online, AS further adds the possibility of allowing Willian to go out on loan (with a purchase option) isn’t contemplated by the Spanish club.

They would prefer to cash in from his sale, but with the player ‘determined’ to leave in January, no scenario can be discarded.