In their Wednesday edition, AS published a small story on West Ham efforts to sign Gabriel Pires. Despite the Spanish newspaper choosing not to go too big with the story, the claims within it are pretty big.

Across just a few sentences, AS explained West Ham have offered Leganes a couple of proposals to sign the player.

First off, they’d be prepared to pay €5.5m for the player for a straight January transfer.

If that doesn’t float Leganes’ boat, West Ham are prepared to loan the player for the rest of the season and pay a fee of €1.9m for that deal.

Added to the loan agreement would be a purchase clause of €9m, although AS don’t state what the conditions of the clause would be, whether it would be automatic or simply down to West Ham’s choosing.

The loan and purchase option could see West Ham paying a total of €10.9m for the player. 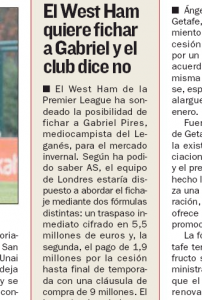 Despite AS saying this is their own information, and sounding confident about it, they also state that Leganes have denied actually receiving any such offer from West Ham.

Pires is a 24 year old Brazilian midfielder, with a Leganes contract lasting until 2021… which will give the club confidence and protection during any West Ham negotiations.

The player holds a Portuguese passport, negating the need for a work permit.