The Tottenham striker’s 56 goals in a calendar year have seen him surpass Alan Shearer, and Kane is being praised all around Europe. Marca have really gone to town and compare Kane to other leading strikers, showing how his goal tally over the year has beaten others.

Of course, Marca weren’t going to give such a number of column inches to Kane without suggesting the possibility of Real Madrid signing him. Juan Castro, a journalist for the Spanish newspaper, has had his say and insists Kane could succeed at Madrid.

There’s some doubt at the club and among their fans given British players haven’t shone too brightly when moving to Spain previously, but Castro isn’t having any of that… he’s convinced.

Kane’s ‘extraordinary’ achievements are the motivation for the signing, and it’s one the journalist believes Real Madrid should seriously consider. 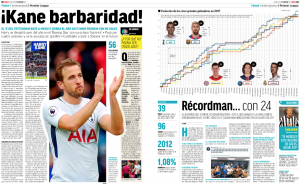 That Marca have a big spread on Kane and Real Madrid interest is only suggested, and then only in a small opinion piece which is presented as swimming against the tide, shows the story isn’t so big in Spain.

It’s the English media who have been pushing Kane to Real Madrid more strongly, and Juan Castro fails to mention probably the biggest factor holding the Spanish side back.

Tottenham, led by Daniel Levy, have a big reputation in Spain of demanding high fees for players and being incredibly difficult to do business with. Florentino Perez has previously been presented as being reluctant to lock horns with Spurs because of Daniel Levy, and that’s probably why Kane to Real Madrid hasn’t had a whole series of Marca front pages yet.