KRC Genk have lost four of their last five matches and Het Belang van Limburg questions whether it will be ‘mission impossible’ in their next tie against West Ham United.

The Belgian side will travel to London to face the Hammers in a Europa League clash on Thursday and the newspaper states even a point will be an ‘unexpected bonus’ for the visitors.

It’s claimed some of their players will have ‘extra incentive’ to face David Moyes’ side and that’s partly because of the interest shown by Premier League clubs.

The Nigeria international has 46 goals to his name since the start of last season and his impressive record has caught the attention of several clubs. 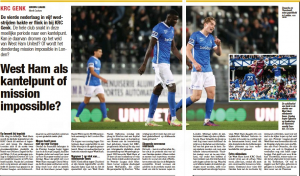 the Genk star, who has ‘not yet put away his dream’ of playing in England.

If Onuachu were to shine this week, and perhaps even help Genk beat the Hammers, it will likely draw further attention from West Ham and a few other English clubs.