West Ham links with Sporting midfielder Rodrigo Battaglia may have never been too strong, at least not enough to create a saga. But the story written by O Jogo about the situation makes it sound pretty solid today.

The newspaper claims that there are several clubs interested in signing the Argentine player next summer, so his agents have been in contact with Sporting to see what will be done.

One of these clubs would be West Ham, who already tried to sign the midfielder in the January market. According to O Jogo, the club made a €20m bid, but had it turned down as the Lions demanded at least €30m to start talks.

Now the Hammers continue to follow him, and are considered as one of the big reasons why Battaglia’s agents have been attentive to other offers that may come. Even though for now, there’s no more than approaches. 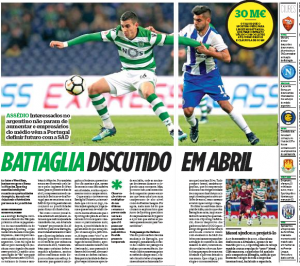 Meanwhile, Roma, Napoli and Inter Milan are the other clubs who are said to be after the midfielder.

Sporting are expected to take a decision regarding his future next month, and considering all this competition, it’s very likely that his price will be increased.

Battaglia would be a cheaper Sporting option than William Carvalho for West Ham.