The defender was the subject of many Hammers claims last summer, and at the time he had less than a year left on his contract with Fiorentina. When it became clear a move was unlikely, the Serbian signed a new deal, but the extension was only for a year, until 2023, so La Viola find themselves in the same situation again.

According to multiple suggestions in the Italian media, the extension was something of an agreement between the parties involved, with it made clear Milenkovic would be able to move this summer should he so desire.

Corriere Fiorentino report there’s interest from England, with West Ham ‘in first place’ for the deal, as David Moyes looks to add a defender. 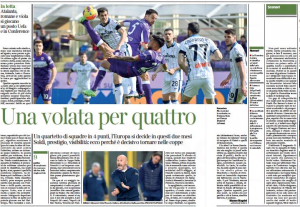 Fiorentina haven’t given up hope of a renewal, but it’s stated that unless they qualify for Europe any efforts could be a ‘waste of time’.

With Milenkovic wanting European football, West Ham’s end to the season could also be crucial for their chances of signing the Serbian.