When there’s a big Barcelona transfer story, the Catalan media can often be very excitable. There’s big claims, front pages, and the situation is often pushed further ahead than it actually is.

That’s been the case with Raphinha, and claims the Blaugrana are working to sign him from Leeds United. Last week saw reports that there’s already been a €35m offer sent to the Premier League club, but Marca, a general Spanish sport newspaper, calm things down a little.

They say that whilst the Brazilian is an option for Barcelona, there’s been no offer made yet and there hasn’t even been any negotiations between the two clubs.

That’s because neither want to concern themselves with that right now.

Marca say there’s ‘no hurry’, from the Leeds United perspective they don’t want the ‘distraction’ as they work to make sure they’re not relegated to the Championship.

Barcelona are aware that Raphinha’s price will drop if Leeds are relegated and therefore they see no reason to rush things, wanting to know the outcome first. On top of that, it hasn’t been excluded that Ousmane Dembele could decide to sign a new contract, therefore ruling his free-agent exit out. 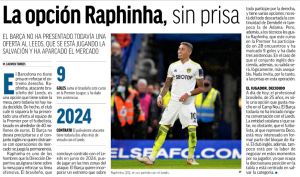 Leeds United have ‘parked the market’ until they know what their fate will be.

The only one, as far as Marca are concerned, who could be edging things forward is Raphinha, and specifically his agent Deco, with them attracted by the prospect of the transfer.