The Portuguese media comes up today with what should be the last details of Matheus Pereira’s permanent transfer to West Bromwich Albion.

Newspaper Record is the one saying the Baggies now have until Christmas to pay the remaining €9.5m for the transfer.

West Brom had already paid €500k for the loan, and now are about to complete the €10m deal. Matheus Pereira is expected to sign a four-year contract with the club. 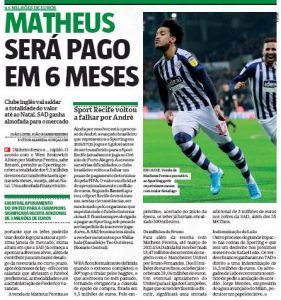 The fact that West Brom will pay the totality of the transfer until December is seen as very good news for Sporting. That’s because not all clubs do that.

Manchester United, for example, are also mentioned in the story, and it’s said they’ve agreed Bruno Fernandes’ move to be paid in several instalments.

Pereira has eight goals and 19 assists in 38 appearances for West Brom this season.