Portuguese side Sporting seem to have received some good news from West Bromwich Albion.

Newspaper Record writes today that the Baggies are expected to advance their payment for the signing of Matheus Pereira.

Loaned by Sporting at the start of the season, the midfielder’s move was made permanent once he reached a number of appearances for the Championship side.

West Brom had already paid €500k for the loan, and with the buying clause now triggered, they must spend another €9.5m on the permanent deal. 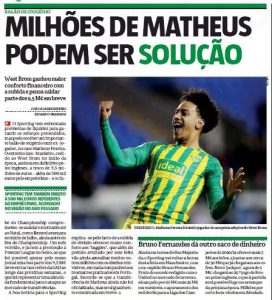 The Baggies were supposed to pay for the move before Christmas, but due to promotion to the Premier League, they now have a better financial situation. That’s why they’re paying ‘a good part’ of the fee ahead of schedule.

Why they’d do this isn’t mentioned.

Record points out that Pereira’s transfer hasn’t been made official yet, but that’s something that should happen very soon. Reports from the English media have been claiming that he’s signing a four-year deal with West Brom.

The Brazilian had eight goals and 20 assists in 43 appearances for the Baggies this season.

Despite claims of impending Man United offer – Marco Reus is...