West Brom target Matheus Pereira is now set to leave Sporting this summer, according to reports from Portugal.

Record brings a story saying the midfielder has been receiving many offers to leave, and both he and the club consider his departure to be the best option.

One of these offers is reportedly from West Brom, who are willing to pay €300k to have him on loan for an year, with other €300k to be paid in case of a promotion to the Premier League. This deal would include a buying option set at €9m.

Record adds that the Baggies are not looking to improve this offer, and that’s why some claims from England say the deal may collapse. 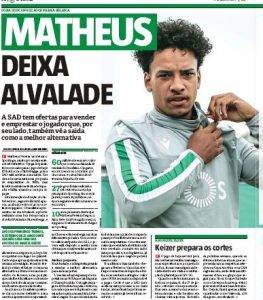 Still, Record states that West Brom’s offer is the best bid so far. It’s claimed that Spanish and Italian clubs have also been making their offers to land the Brazilian, but haven’t matched the Baggies’.

Yesterday, the Portuguese media had already reported that Matheus Pereira sees the move to the Championship side ‘with good eyes’. So it now looks like a matter of finding an agreement with Sporting only.