Arsene Wenger is enjoying life aware from the glare and pressure of being a Premier League manager.

More than nearly anyone, he deserves the break from being in charge of a top football club, and has been enjoying his time slightly in the shadows.

This week the former Arsenal manager played in a charity game, along with others including France manager Didier Deschamps, before taking to the sidelines and managerial duties.

After playing, Wenger was inevitably asked about Thierry Henry taking over at AS Monaco, after the pair enjoyed so much success at Arsenal.

L’Equipe subsequently has a small interview on Thursday.

“He, like others, such as Patrick Vieira, can be proud of his playing career and be able to start training at the highest level,” said Wenger. “Me, it makes me happy, because, at least I didn’t leave them disgusted with the coaching profession!

“Then, he will make his way. He is very intelligent, he has the necessary qualities to succeed. Then you need good players, believe in them, have a little luck and, above all, be in a favourable environment. Personally, I had this chance in all clubs and I wish for him to have an environment that allows him to express himself and that is patient enough. Because when you start a coaching career, you always think you’re going to win, but the good coaches are the ones who survive the disappointments.” 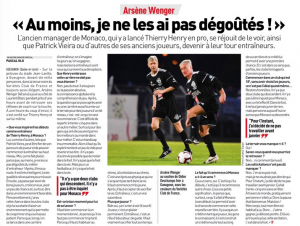 Wenger still has plans to return to management following his Arsenal exit, and told the French newspaper: “For now, I decided not to work until January. It’s been thirty-five years without stopping. Around the world, hardly anyone has done that. So the break was welcome.”