Werder Bremen must feel like the wolves are circling.

Having already seen Thomas Delaney leave the club for Borussia Dortmund this summer, and former captain Zlatko Junuzović leave for RB Salzburg, more exits could be on the agenda.

Goalkeeper Jiri Pavlenka, who had an excellent season after a shaky start, is interesting Liverpool, report SportBild, and Max Kruse is of interest to others in Germany.

Ludwig Augustinsson is also said to be receiving attention.

The 24 year old left back is currently at the World Cup with Sweden, and played the full match against South Korea. Watford and other, unnamed, clubs have him on their ‘shopping list’ for a summer transfer, according to SportBild. 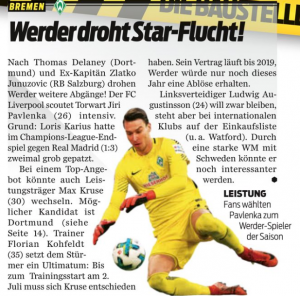 It’s stated the player wants to stay, but everything could change if he impresses at the World Cup.

The suggestion seems to be that Watford and others, if impressed, may make a firm move for Augustinsson, which ends up tempting for both Werder Bremen and the player.

Sweden face Germany on Saturday, if the fullback does well in that match then the interest will surely grow.