Home Europe Watford star’s agent has ‘offered’ him around – Profile being ‘followed’ as...
SHARE

Around a week ago, a report from the Italian media emerged suggesting that Gerard Deulofeu could return to Milan.

The article came following Watford’s relegation back down to the Championship, and if one player is unlikely to stay at the club in England’s second-tier, it’s the Spaniard.

That’s no slight on the Hornets, but the former Barcelona starlet has been one of their best players when fit, and were it not for his untimely serious injury earlier on in the campaign, there’s a good chance they might have stayed up.

So, despite having an affinity for Vicarage Road and those who fill it when there’s no Covid-19, the idea of leaving has started, and it was said that of returning to Milan was ‘making headway’.

‘Preliminary contacts’ were said to have been made, but nothing concrete had taken place as of yet. 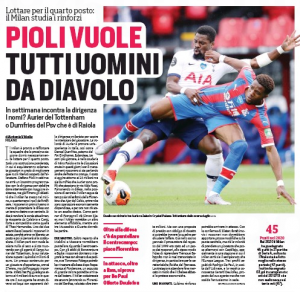 Corriere dello Sport update the situation on Wednesday when looking at the types of deal Milan could do this summer, and Deulofeu is mentioned.

It’s stated the ‘old acquaintance’ is being ‘followed’, stemming from the Spaniard’s agent ‘offering him’ to the Serie A club.

However, the idea has, at least for now, not ‘heated the enthusiasm’ among those in charge of such affairs.

Perhaps as time goes by and options dwindle, should they not find their luck elsewhere, then Deulofeu will become a more attractive profile.