Galatasaray target Idrissa Doumbia reportedly has had offers from Watford and Southampton, but Posta say neither English side could sign him because of work permit issues.

The 22 year old midfielder has been linked with a move to Galatasaray after having problems with Sporting over a wage cut, and Posta report the Super Lig side are closing in on him.

It’s reported Gala have been given a boost in their pursuit of Doumbia because two of his biggest admirers, Southampton and Watford, can’t get a deal done for him.

The Ivorian midfielder, who has yet to be capped by his country, could leave Sporting on a free transfer and it seems Galatasaray are now ahead in the race to land him. 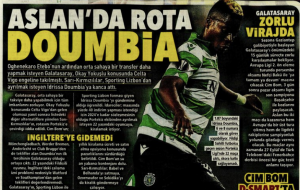 Along with the Istanbul side, Borussia Monchengladbach, Anderlecht, Club Brugge and Werder Bremen are also said to be still interested in signing the player.

Doumbia joined Sporting from Russian side Akhmat in 2019 and is under contract with the Portuguese club until June 2024.