There was a time in the transfer window when it really seemed like João Palhinha was on his way to Wolverhampton Wanderers.

Reports from the Portuguese press said Wolves were a ‘solution’ for the player, who was just returning from a loan at Braga and needed to find his place at Sporting.

Then things went quite cold, with the Premier League side making two big signings from Portugal by bringing Fabio Silva and Vítor Ferreira to Molineux.

Still, there’s some insistence coming from Portugal that Wolves are still interested in the Sporting player, even though it now sounds a little unlikely they’ll land him. 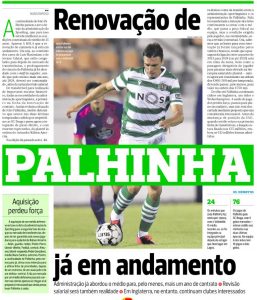 Newspaper A Bola has today a story about Palhinha’s renewal with Sporting. They say there are negotiations for him to get his deal extended to 2024.  At the end of the article, they state English clubs continue to keep an eye on the player, and Wolves are one of them.

They say Palhinha is still leaving Sporting if they receive an offer ‘they can’t refuse’, but his departure is no longer a priority for the club  The Lions were demanding €15m, and this price should go up now.