According to Turkish newspaper Sabah, Besiktas have reached an agreement in principle with Watford for the Premier League’s side Italian striker Stefano Okaka.

The 30-year-old has been closely linked with a move to Besiktas in recent days as the Turkish giants are in the market for a striker before the transfer window shuts on 2nd of September.

Today, Sabah claim both clubs have reached an agreement for a season-long loan deal for the player, and Besiktas will have the option to make the move permanent at the end of that.

However, the amount the Turkish side will have to pay doesn’t appear to have filtered through.

The four time Italy international is expected to leave the Vicarage Road this summer after becoming frustrated with his lack of game time under Javi Gracia. 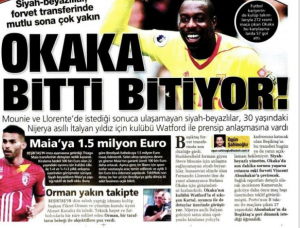 Okaka spent the second half of last season on loan at Serie A club Udinese, where he scored 6 goals in 16 appearances.

The former Sampdoria striker still under contract at Watford until June 2021.