Wesley Moraes’ injury at the start of last year forced Aston Villa to bring in a new striker in the winter 2020 market.

Dean Smith’s side took Mbwana Ally Samatta from Genk last January and he had a good start to his life in England, scoring on his league debut against AFC Bournemouth.

That was his only goal for Villa in the league and he went on to add one more in the EFL Cup final defeat to Manchester City.

Het Belang van Limburg have published a long interview with the 28-year-old in today’s edition of the Belgian newspaper, and he explained what went wrong for him in the second half of last season.

“I don’t want to talk negatively about Aston Villa. The task was not to be relegated. The team played very defensively and we didn’t score very often. The players who were already there also found it difficult to score goals. Everyone went through a bad period,” he said.

The Tanzania international’s desire was to showcase his qualities in the Premier League this season, but he was not given an opportunity after Smith decided not to count on him. This forced Samatta to go out on loan to Fenerbahçe.

HBVL asked when he decided to go out on loan. Responding to that, Samatta said: “It was certainly not my wish to leave the club already. I had only been there for six months and I started developing friendships there.

“I trained more to be ready for the competition, but the club had a different plan. I no longer fit into the coach’s plans. I would only get few chances to play. An attacker only wants to stay if he is the coach’s top priority, so I had to leave.”

Asked how hard it was, he stressed: “I really gave up for months. It was an emotional period, the toughest of my football career. I was finally in the Premier League, but I didn’t want it to end like this. I have set myself the goal that I want to return to England one day.” 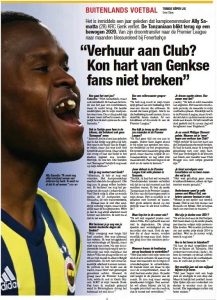 Samatta’s former coach Philippe Clement wanted to take him to Club Brugge last summer, but he decided not to join the Jupiler Pro League winners.

“I could not break the heart of the Genk supporters. I had the chance, but I simply couldn’t get it over my heart. For four years I defended the colours of Genk, a transfer to Club Brugge would not have been proper,” the frontman added.

Samatta has scored five goals in 15 appearances this season for Fenerbahçe.