The craziness of Monday and Tuesday can perhaps be bookended by Tottenham Hotspur sacking Jose Mourinho, as the European Super League was still alive, and then Manchester United announcing Ed Woodward had submitted his resignation.

Woodward has been the subject of much anger from other clubs and Aleksander Ceferin. The UEFA chief made clear this week he felt the Manchester United boss had lied to him in the days leading to the announcement of the ESL.

Thursday’s edition of L’Equipe reports action could be taken against Woodward personally by UEFA, with the tendency more to go for individuals rather than clubs such as Manchester United.

The French newspaper explains Woodward ‘had responsibilities in the structure in charge of the European Cups (UEFA Club Competitions SA), controlled by the European Confederation and in which the ECA also participates. As such, he had access to confidential information about business partners or broadcasters.’ 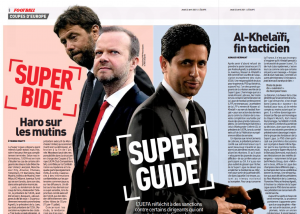 A debate will take place tomorrow to decide what will happen to him, and also others such as Juventus’ Andrea Agnelli.

The latter gave up his presidency of the ECA as the ESL was launched, and that gap has now been filled by PSG’s Nasser al-Khelaïfi, who has played the whole situation rather better than the other two men.