Jason Denayer is edging closer towards leaving Manchester City, according to multiple reports in Belgium.

Tuesday’s edition of Belgian newspaper Het Belang van Limburg claims the centre-back is expected to sign for Lyon on a permanent transfer.

The 23-year-old joined the Premier League winners’ academy in 2013 and has spent the last four seasons away on loan at Celtic, Galatasaray, Sunderland and a second spell with the Turkish club.

The defender has already trained with the French club and he is set to sign a four year deal with Bruno Génésio’s side.

Another Belgian newspaper, Het Laatste Nieuws, claims Manchester City will pocket €10m from their player’s sale, despite him failing to make a single first team appearance for the Etihad outfit. 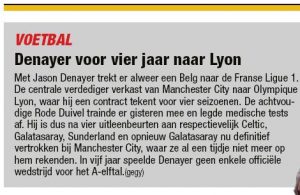 At Lyon, he will earn more than €2m-a-year net and will be targeting regular playing time so that he can make his way back into the Belgium squad in the near future.