Pervis Estupiñán returned to Watford after spending last season on loan at Osasuna.

The left-back has been linked with a handful of clubs, and his exit from Vicarage Road now seems to be edging closer, according to AS.

Villarreal are interested in the 22-year-old, and the newspaper states the La Liga side ‘finalises’ the fullback’s signing.

It’s claimed the Yellow Submarine will pay €15m to the Championship side, and the Ecuador international’s transfer could be closed in the ‘next few hours’.

Marca partly echoes AS’ claims, as they state the defender will join Unai Emery’s side in the coming days.

The report explains the Spanish side have already reached an agreement with both the South American and Watford. 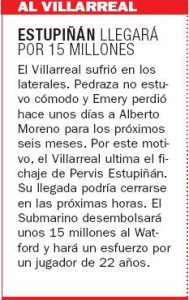 Villarreal will pay €15m to acquire Estupiñán’s services, and in the process, will make him the most expensive defender in the club’s history.

Emery’s side were forced to enter the market for a new left-back after Alberto Moreno suffered a serious knee injury last week.

The ex-Liverpool defender is set to be out of action for the next six months.