Barcelona are interested in Eric García and reports from the Catalan media suggested last week was ‘key’ for the Blaugrana to sign the Manchester City defender.

However, no deal has been concluded as the two clubs are far apart with their valuations of the centre-back.

On September 10th, AS reported Barca CEO Òscar Grau submitted a proposal worth €10m for the 19-year-old, but the offer was short of the Citizens demands.

Sport on Monday state the La Liga side’s offer was €8m plus €2m in variables, which is ‘very far’ from the €40m demanded by Pep Guardiola’s side.

This is the new figure mentioned in the García saga, as earlier reports suggested City had set a €25m asking price. 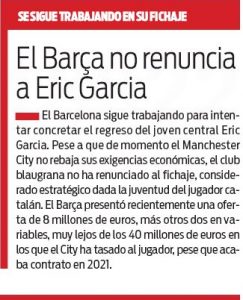 It’s claimed City ‘do not lower the financial requirements’, and despite that, Barca have ‘not given up’ on the Spaniard, who is viewed as a strategic signing this summer.

García’s current deal lasts until 2021, and he has already communicated to City he won’t be signing an extension.