Manchester City confirmed on Thursday that Pep Guardiola has signed an extension and the new deal will keep him at Etihad until 2023.

He started the season with less than a year left on his contract with the Citizens and this led to speculations linking him to other clubs.

Friday’s edition of Sport explains ‘offers were not lacking’ for the former Barcelona manager as Juventus and Paris Saint-Germain ‘got in touch’ with the 49-year-old’s entourage, but the Spaniard didn’t consider those ‘options’.

The newspaper states, ‘In Italy it is difficult to find the same perspectives as in the Premier, while the option of PSG would be a disappointment to the ownership of the City Football Group. Pep is not empty as in 2012’.

It’s claimed Guardiola’s desire is to continue coaching and City ‘strived to be the best option’ for him as there are ‘several commitments’ with the English club.

Sport mentions ‘members of the old guard’, Fernandinho and Sergio Agüero, will finish their contracts after this season and will have to move on. And there are new faces that needs to brought in to the club. 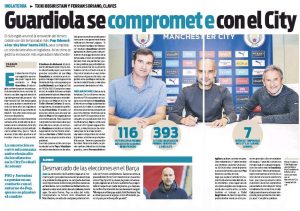 City are aware of it and, having sorted out their manager’s future, they now want Guardiola to lead the ‘change of cycle’ at Etihad.

Txiki Begiristain, the club’s sporting director will now ‘design another project’ to meet the needs of the team, and Guardiola’s contract extension can be used as a the ‘best guarantee in any negotiation’.