In July 2006, the day after Italy won the World Cup, by defeating France on penalties, the front page of Gazzetta dello Sport shouted out ‘Tutto Vero!’.

To a public waking up wearily from their celebrations of the evening before (those that had actually gone to bed), it’s reassured them ‘All True!’, this wasn’t something they’d imagined.

Since then ‘Tutto Vero’ has become a more regular phrase in the Italian sport media, becoming more than the value of the words… and also a nice little reminder. When something is spot on, it’s Tutto Vero!

And that’s the case with Tottenham holding a meeting on Tuesday of this week over signing Joachim Andersen from Sampdoria, report Tuttosport in their Thursday edition.

Sampdoria’s Antonio Romei, who is variously referred to as a lawyer and club director, travelled to London to speak with Tottenham representatives over a transfer of the central defender.

Of course, this isn’t the first time a meeting has been claimed.

In mid February the same man was said to have travelled to London looking for investors for Sampdoria. Whilst there, along with intermediary Paolo Busardò, he met Tottenham. 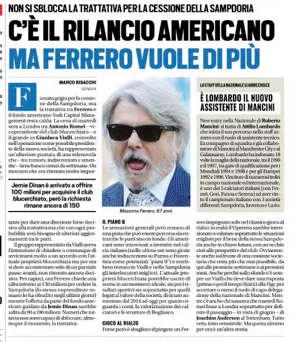 The plan was to find an ‘agreement in principle’ with Spurs on a price for Andersen. Therefore, if the 22 year old agreed to a move to Maurico Pochettino’s side, the price would already be agreed.

The resulting figure was €25m, which seemed reasonable.

There’s no update on what happened in this week’s meeting, but it does seem like things are edging forward.