Manchester United star Paul Pogba ‘no longer hides’ his ‘desire to extend’ his contract at Old Trafford, according to Thursday’s edition of L’Equipe.

The midfielder’s current deal expires in 2022 and the Red Devils face the risk of losing him for nothing, for the second time, at the end of this season.

In recent times, the 28-year-old has taken time to analyse and reflect on his future, and L’Equipe explain ‘currently, the trend is very clear’.

When with those close to him, Pogba ‘does not hide’ his temptation to stay in Manchester ‘over a long period’. There have been several factors for this.

Manchester United are showing ambition to challenge for trophies and Cristiano Ronaldo’s signing is used as an example. In addition to this, the Glazers have ‘made it clear’ to the player they ‘would do everything to keep him’ at the club.

The report states: ‘Depending on the sources interviewed, the progress of the discussions between the two parties is changing. But several people close to the midfielder believe that they have more than begun….’

Pogba is ‘comfortable’ with his daily life in Manchester, ‘knows how to be in a position of strength’. His camp’s ambition, likely from Mino Raiola, is clear and it is to make the World Cup winner the highest paid player in Premier League history.

In the post-Covid market, the Frenchman knows United’s economic strength. He is also aware only a handful of clubs can offer him similar figures, which L’Equipe suggest to be around €20m per season.

To reach these figures, PSG could be an option, but Pogba isn’t keen on moving to Paris. Real Madrid have been his dream and he has never hidden it. However, the La Liga side’s priority is to sign Kylian Mbappé. 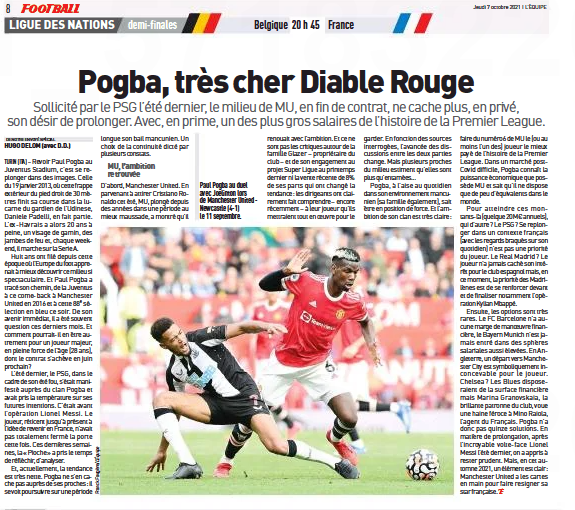 After this, the options are limited. Barcelona are struggling financially, while Bayern Munich, as per L’Equipe, ‘never entered such high salary spheres’. A move to another English club isn’t considered. Therefore, Pogba ‘doesn’t have fifteen solutions’.

The newspaper uses Messi’s final months at Barcelona as an example to warn Pogba to be ‘careful’.

L’Equipe end the report by stating: ‘…in this autumn 2021, one element is clear: Manchester United have the cards in hand to re-sign their French star.’