The Florence media have been falling over themselves in recent weeks to explain just how well Lucas Torreira is doing at the club.

Arriving at the Tuscany club during the summer window, on loan from Arsenal, the midfielder has made himself an essential part of the team.

Corriere Fiorentino explains on Friday that Fiorentina need him on the pitch, and the difference is hugely noticeable when he’s not available to start a match, or comes off the pitch during one.

Torreira himself is also very happy, which is a huge contrast to his situation around a year ago. The Uruguayan had wanted to return to South America, but an agreement couldn’t be found and Italy was considered a reasonable alternative.

He’s now settled again, so it would seem strange if he doesn’t want to continue. 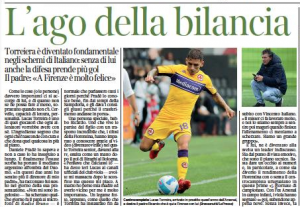 Corriere Fiorentino say that Torreira has ‘convinced everyone at the Serie A side, and they want to sign him permanently.

It’s explained talks will soon start on a permanent deal, and it’s not made clear if that means talks to try and get Arsenal to lower the €15m fee, or relating to the player’s contract for next season and beyond.