Home Europe Transfer is ‘about to close’ and West Ham are set to lose...
SHARE

A few days ago we covered claims from France about West Ham making initial efforts for Lyon’s Moussa Dembélé.

Sébastien Haller has since completed his move from the Hammers to Ajax, and there’s now some urgency for David Moyes to get a replacement in. Dembélé has been linked repeatedly with a move to the Premier League, with West Ham one of the options pushed forward.

The London club were said to have ‘activated’ the track leading to signing the Lyon player, and they did so last week. However, Atletico Madrid have also been on the lookout, having allowed Diego Costa to terminate his contract with them.

Sunday’s edition of Mundo Deportivo reports the Spanish club are ‘about to close’ Dembélé’s signing. Atletico will be loaning the striker from Lyon for the rest of the season, with a purchase option of €35m should he manage to impress Diego Simeone.

Lyon newspaper Le Progres quote the French club’s sporting director Juninho as saying: “He came to see me and he thinks it’s time for him to change teams. He told me he lost motivation a bit. Moussa is a player that I really appreciate and who we counted 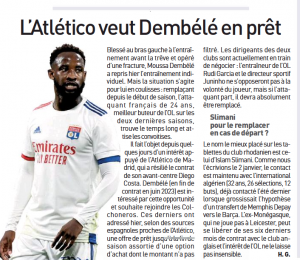 on. But keeping someone who doesn’t really want to live life intensely for the next five months is not ideal.

“We are discussing with Atletico, I think Moussa has come to an agreement on his side but he is missing our part too and so it has not yet been done.”

West Ham and David Moyes will now almost certainly have to look elsewhere.