Home Europe “As if we came to steal money” – Player gives his slant...
SHARE

Tottenham forward Steven Bergwijn has hit back at claims from his former club PSV Eindhoven following his move to Spurs in January.

The forward joined Tottenham in a €30m deal in the winter transfer window, bringing an end to nine years with the Dutch club.

His move away from the club was a fractious one, to say the least, with the 22-year-old receiving plenty of criticism for various things, mainly to do with the money involved.

He, though, has hit back at those saying things against him publicly, stating the situation was not how some presented it.

“It has been good for all parties,” he told De Telegraaf.

“Things didn’t go well with PSV at the time, and I had the idea that everything in the days around the transfer was being put on me.

“At least I had that feeling. General manager Toon Gerbrands has made a bit of a fuss in the media, but he himself has now indicated that they should be happy with that deal.

“The other people at the club, such as John de Jong and Peter Fossen, solved it very neatly at the time.

“PSV stays in my heart forever. My representatives and I have had quite a lot to endure. Like we came to steal money! No, we just came to ‘bring’ 32 million.”

Tottenham moved for Bergwijn in an effort to add extra firepower to a frontline that was suffering after the loss of Harry Kane to a long-term injury.

It proved to be a smart move, with Bergwijn scoring a superb debut goal in a surprise 2-0 win over Manchester City at the beginning of February.

That was a big moment for him personally, and one he says he thinks shut up plenty of naysayers who had questioned him.

“I’ve seen that goal again and again. It still gives me goosebumps.

“For me, that transfer was just the right step at that moment. We were in a dip with PSV, stood at a great distance and the trainer (Mark van Bommel) was fired.

“With that goal against City, I immediately gagged some mouths. It’s a pity that I got injured pretty fast after that, but in the end, I only missed one game.”

After enjoying such a strong start to life in England, Bergwijn was brought back down to earth when he picked up an ankle injury in a clash with Burnley.

The knock had looked like ruling him out for the rest of the season, an unfortunate turn of luck and something that saw plenty of criticism aimed at Tottenham’s medical team.

Claims from the Netherlands indicated they had overused and overworked the new signing and that those in the know had predicted him breaking down sooner rather than later.

He disputes that, though, and with the Coronavirus outbreak having given him time to heal up, now says the aim is on securing Champions League football.

“It was said that I wouldn’t be fit or overtired. Really nonsense again. 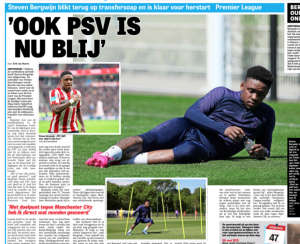 “I got a hit from behind, my ankle folded double, and I tore my ankle ligaments.

“For me, the goal is clear: to secure Champions League football.

“We have to move on. It’s time to create more of those moments, like the goal against Manchester City.”