The 22 year old has been in impressive form for Fenerbahce since joining the club from Ankaragucu at the start of the season. Fanatik claim his performances have caught the eye of Sheffield United, and the Premier League club are will look to knock on Fenerbahce’s door with an offer in the summer.

It’s reported Fenerbahce board member Selahattin Baki, who worked at Sheffield United between 2013 and 2017 could be key in this possible transfer. 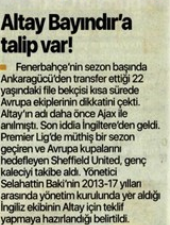 Any move for Bayindir will also depend on the future of Manchester United loanee Dean Henderson. The English goalkeeper is the undisputed No.1 in Chris Wilder’s side but he could return to his parent club next season to compete with David De Gea.

Bayindir, meanwhile, is a young Turkish goalkeeper with lots of room for improvement and Fenerbahce would like to keep him in their squad. However, the Turkish club’s poor financial situation could force them to sell him.