Nuno Espírito Santo wants to ‘fish’ at Wolverhampton Wanderers as he ‘does not forget’ his former player, Adama Traoré, reports AS.

The manager ‘wants to sign’ the Spaniard for Tottenham Hotspur and Wolves have set a €40m asking price for the winger.

In order to fulfil his manager’s wish, Spurs chairman Daniel Levy is ‘preparing an offer around that amount [€40m]’ to acquire Traoré’s services. It’s not made clear if the player is open to the idea of moving to north London.

AS add Wolves can use the funds from Traoré’s sale to ‘sign Gonçalo Guedes’. The Valencia forward’s agent, Jorge Mendes, has been trying to place his client at another club throughout the window.

A move to Molineux was initially mooted for Guedes, but it quickly faded after Wolves took Francisco Trincão on loan from Barcelona.

Lage’s side can improve their finances with Traoré’s sale to Tottenham, which could then allow them to invest part of the fee [€25-30m] to sign Guedes.

At this point, it looks like Valencia are hoping for Traoré’s move to Spurs to go through so 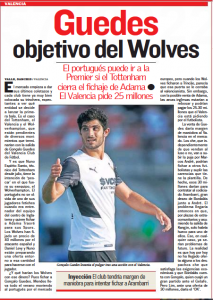 that it can help Wolves fund Guedes’ deal.

Los Ches are keen to get the 24-year-old off their wage bill and simultaneously earn money from his sale, and they will receive an encouragement in getting rid of Guedes’, if Traoré were to leave Wolves.

Wolves, Tottenham and Valencia are involved in a three-way battle and it remains to be seen who among the three clubs will ‘decide to launch the first bullet’.