Nothing with Pau Lopez is ever simple.

The young goalkeeper’s loan to Tottenham Hotspur was supposed to seamlessly move into a permanent deal during the summer, but failed to do so. Tottenham were unable to agree a fee with Espanyol for the Mauricio Pochettino approved target, and Pau went back to his parent club.

With a contract ending in June, there’s obviously the chance of a free transfer for Spurs on the horizon, and there’s been interest from elsewhere too. Brighton and Watford have been credited with serious interest in the player, with Watford joining the chase relatively recently.

Brighton signed Tim Krul on a three year contract recently, but given the goalkeeper’s up and down time back in the Netherlands, ruling out Pau interest on that account is probably premature.

Watford would have some persuading to do if they weren’t going to near-guarantee a starting place, and Tottenham may find things harder next summer, with Pau first choice so far this season at Espanyol. 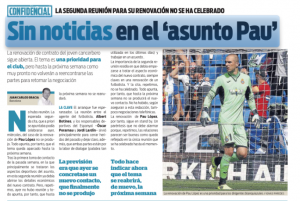 Given that he’s been getting picked, and has been impressing, there was hope over a renewal, but Sport say talks have stalled. The Catalan newspaper and others had been expecting progress on a renewal but the expected meetings haven’t happened and everything is up in the air again.

Until Espanyol get a renewal, and it’s not certain they even will, Tottenham, Watford, Brighton, and any other interested clubs, still have a free transfer chance on the horizon.